Observations from "This is Homelessness" 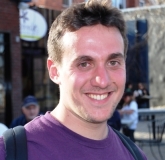 My name is Nick Tscheekar and I am the Initiatives Director at the Community Foundation, managing the Youth Network Initiative (You’N-I). I recently lived and slept on the streets to raise community awareness of youth homelessness. My colleagues for the three day event, “This Is Homelessness” were members of the Eddy House, Volunteers of America, and local media. Our group’s goal was to connect with as many youth as possible, to learn about their daily lives and gauge their interests in the YOUth Resource Center, a downtown drop-in center run by The Eddy House. The three biggest points I took away were the prevalence of drugs, the cost of incarceration, and the availability of free meals. One of the first people I got to know was Nathan, a welcoming 20 year old. He was quick to answer our questions, but he did not want to be recorded in any capacity. Nathan was high on meth and had not slept for three days. I quickly learned meth was very common. You can obtain a personal amount for $5 and Nathan was able to get for free from a friend, claiming “it’s easier to get and used more often than weed”. Although drugs are prevalent among youth who are homeless, I do not want to create a perception that they are homeless or became homeless because of addiction. While some youth who have aged out of foster care had access to resources, they preferred to be on their own than go back to a system or a family that caused them pain. I learned from the youth I talked to that their use of hard drugs began after they became homeless. Being a victim of abuse, lacking an I.D., high school diploma, or a family to support them, the days pass by slowly and recreational drugs are the only way to numb their situation. We also discovered it costs Washoe County approximately $560 per night for a minor to be incarcerated at the Jan Evans Juvenile Detention Center, an amount that could easily cover a month of rent. We witnessed a young man get cited for selling LSD. As he was handcuffed his friends cheered him on, exclaiming that at least he would be able to sleep indoors tonight. A final observation is the availability of food for the homeless. I got lunch at St. Vincent’s dining hall and had dinner from We Care Volunteers near the Morris Hotel on Record Street. All of my meals were high quality and of decent portions.  We heard from numerous people experiencing homelessness that they never go hungry. While it is great that the need for food is met, a side-effect is that it also prevents people from taking greater strides to independence. If you would like to know more about our experiences or how you can help runaway, aging out of foster care or youth who are homeless, please give me a call. Nick Tscheekar, Initiatives Director 775-333-5499 Connecting people who care with causes that matter. P.S. Set your DVR to record Independent Lens: "The Homestretch"  documentary about youth homelessness on KNPB Channel 5 Public TV Sunday April 19th at 11pm!

Stay up to date!